After months of people hyping up the food at coast cafe and declaring it to be best fucking thing since Gunpowder which was truly one of my favorite joints in Delhi. ( on a side note who in the right mind moves a successful outlet to GOA ?? Seriously !!! pass me what ever you guys were smoking ) I finally made it to coast cafe dinner. Let me clear the air first, personally very fond of south Indian coastal non vegetarian food ( I would rather have Ebola than be forced to eat South Indian vegetarian). Dreading the weekend village crowd we got there early without a reservation and were seated quickly but that’s pretty much all the prompt service we had all night. The Menus were presented shortly ( Read 5 mins later) but since it’s a so-called ” in place ” i give them a pass, and it was just about the start of the dinner service for them.

I usually have a set menu in my head before i go to place and decided to start off with the Mutton Sukkha and my word it was disappointing Overfried chucks of mutton with huge pieces of coconut if i wanted to have soo much coconut i would have ordered just the coconut was the mutton pieces ( extremely chewy) a seasoning ???

Next up was the chicken stew and thankfully it wasnt a total cock-up fine it was too milky and less stewy but i have had much worse and was a bit of a redeemer after the unqualified disaster that was my mutton dish.

Tasted but only just tasted the veg cocum stew since it was ok not much to write about. Actually there is but its combined with the next dish i ate.

The Fish Cocum stew: Dear coast cafe if i wanted to have Sambhar with fish could have just got Sambhar from Sagar and added my own fish thank you. Since my previous dish was veg i can accept it as tasting like Sambhar but Fish !!! You gotta be kidding me.

Deserts no thank you… I was still simmering over having eaten Sambhar flavoured fish.

Over all verdict : over hyped, overrated, over priced. Its like the gunpowder’s Gucci Wearing IILM educated cousin. A big let down. 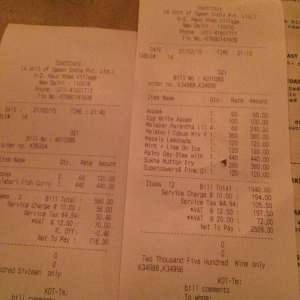 Tales from the Angry Room